All names have a history, be they humans or otherwise. What is interesting about the name of a “starship” are its early beginnings and how it started from a simple concept and grew into a classic design. The name “Nomad is no different and it too shares a historic and memorable beginning.

The word “Nomad” came from an earlier reference when the “Nordic Nomads” populated earth as the  “Vikings”. Since then Starfleet named a simple computer space probe the “Nomad”, then a shuttlecraft on the USS Stargazer, and finally the then Nova and now Sovereign-class starship – thus began the historical name of  “Nomad”.

To obtain this goal and in keeping with the time-honoured tradition of train, drill, and test, STARFLEET requires their members to fulfill department-specific courses offered by STARFLEET Academy.  Individuals can choose to take these courses for their own entertainment, Academy-issued diplomas, rank promotions, or participate in vessel readiness certification.

As the cohesive unit that it is, the USS Nomad crew is striving to obtain as many vessel readiness certifications as possible; and, as the crew continues to train and provide us with their course certificates we will continue the ongoing process of submitting readiness applications for the USS Nomad.

The name Nomad has a history in Star Trek from almost the beginning.  In The Original Series episode entitled “The Changeling” (S2E3), we meet NOMAD as a terran prototype computer space probe which had been transformed into a terminator of “imperfect biological beings”.  A frightening start!

As for STARFLEET International, the Starship Nomad has a history that spans nearly 3 decades.

The fist ship was the shuttlecraft Nomad, based out of Leavenworth, Kansas, in Region 12.  She was launched from the USS Stargazer in 1991, under the Command of Commander Mike Malotte.  In 1992, Shuttle NOMAD was recognized as the Region 12 Shuttle of the year and was commissioned as a full chapter that same year.  She was redesigned as Constitution Class refit with the registry number NCC-1805, with the motto “Second star to the right and straight on ’til morning.”

In February of 1997, the Nomad was again refitted and recommissioned as the USS Nomad, NCC-78500, a Nomad Class Exploratory Cruiser, and served as the Flagship of Region 12 while Captain Malotte was the R12 Region Coordinator.

Cmdr. Mike Malotte was the original CO of the Nomad.   When he left the ship (Malotte moved from Kansas to Arkansas), Ken Janasz took over as Commanding Officer, to be followed in turn by Carl Johnson.  When Captain Johnson became R12 RC, PJ Trotter assumed command.

Fleet Admiral Mike Malotte came back as CO in 2006 and oversaw her decommissioning. The Nomad was retired in 2006, after 15 years of distinguished service, having served twice as R12 Flagship and once as Fleet Flagship.

On the 23rd of June 2020, the NOMAD was relaunched as a NOVA class Starship.  Bearing registry NX-72382 and under the command of Commander Joel Robert Ehl, the ship’s name drew inspiration from the Nordic Nomads of Earth’s Viking history.  On November 23rd, 2020 the Nomad was commissioned to NCC-72382, under the command of Captain Ehl.

The Nova-class NOMAD was built at the Utopia Planitia Fleet Yards and was designed to serve as a science and scout vessel. This line of ships was one of the first to be fitted with the Emergency Medical Hologram program.

Additionally, the ship carries over some of the spaceframe originally designed in the Defiant Pathfinder project, which includes a recessed bridge that is protected from conventional attacks by an outer ring. From here, the entire ship could be operated with as little as two officers. There was a hypersonic Waverider shuttle, docked to the underside of the saucer section, and she is designed to land and launch from a planet’s surface when needed.

The Nomad again seeks out new adventures, to boldly go where no one has gone before.

“Without Freedom of Choice, there is no creativity”

Since its launch on February 11th, 2021, the sovereign ship “Nomad” has already accomplished two exceptional missions of charity status.  Although the new ship has very little history, it has a great beginning. With an amazing and caring crew sacrificing time and energy to help those in need. Is it any wonder the USS Nomad is the pride of STARFLEET?

The ship’s Captain Joel Ehl has always been committed to reaching out to the community long before the sovereign ship was commissioned. It was his goal to ensure others in need were cared for and that people remembered the name “USS Nomad”.

The crew of over thirty personnel come from every background and two separate countries. Each member contributes what they can to ensure the work is accomplished and other members are supported. Members are encouraged and rewarded by one other and through promotions within the ranks.

Being aboard a starship has many responsibilities, challenges and rewards. The responsibilities remind us of our duties, the challenges help us to grow and the rewards always stay with us. So although we have very little history now we have great potential and a promising future ahead. 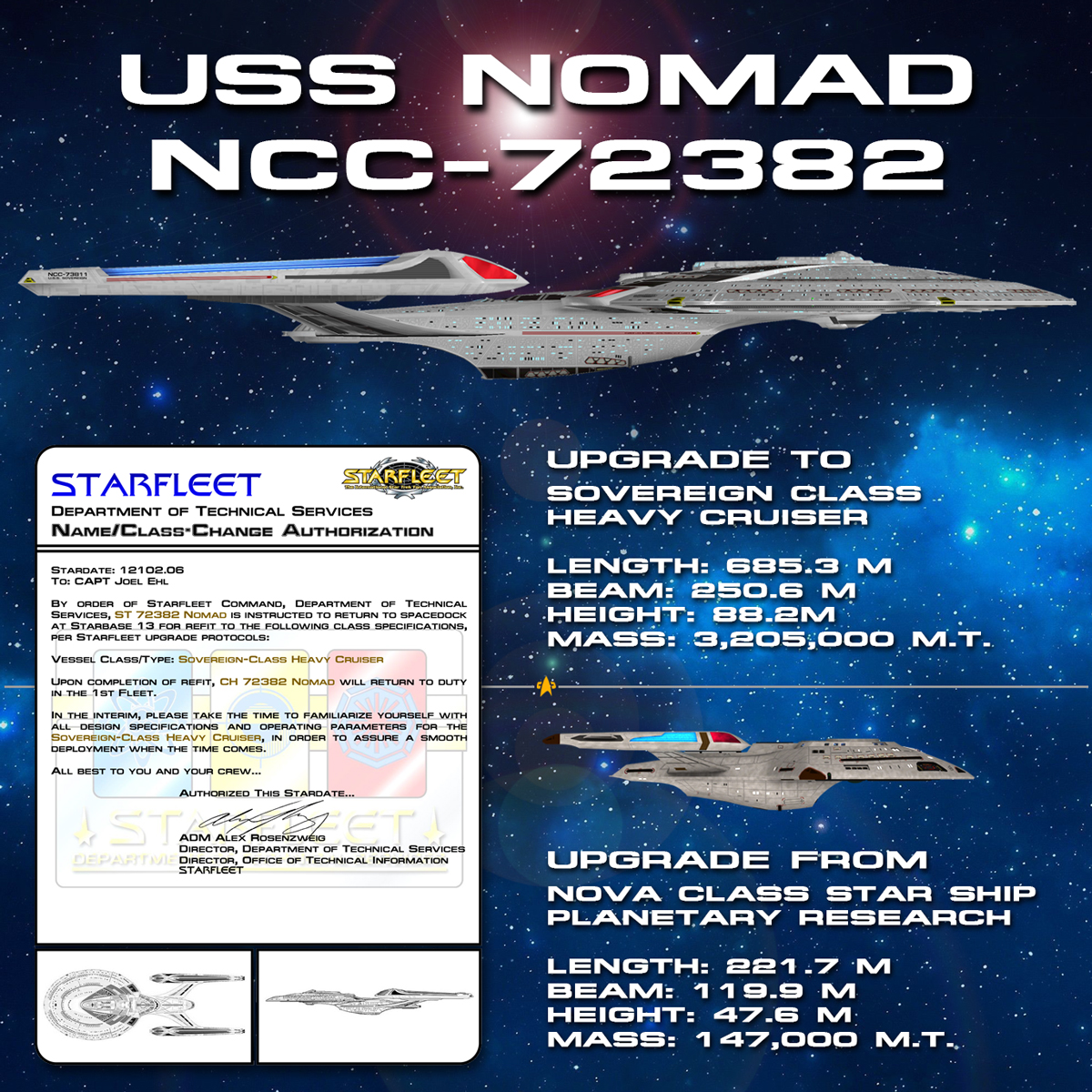 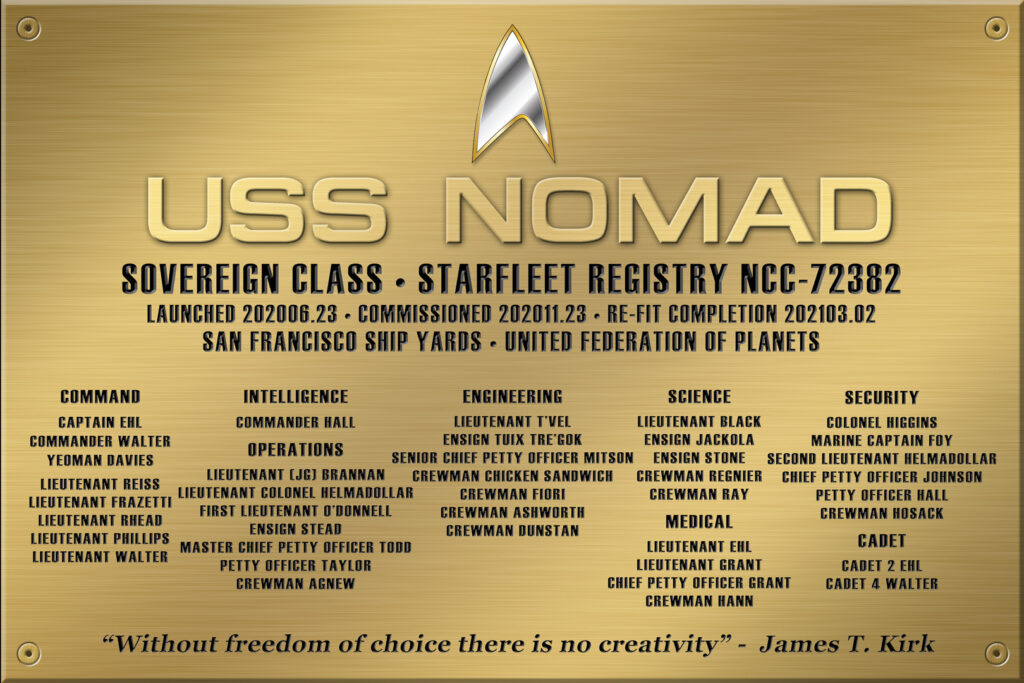