The STARFLEET Marine Corps (SFMC) is a group affiliated with STARFLEET, The International Star Trek Fan Association Inc.. The SFMC is considered an office under and reports to the Vice Commander, STARFLEET.  Fictionally, the SFMC is part of the Ground Forces (rarely seen in episodes but assumed to be part of the Naval Fleet of the United Federation of Planets).

As STARFLEET members, they pay regular dues and their membership requirements remain the same. Prior military service is not required.  One exception – the member must be in good standing within STARFLEET.  SFMC has different promotional rank names and organizational structures than the Naval portion of STARFLEET. SFMC takes part in the local chapter, Regional and Fleet-wide activities, and occasionally will hold their own separate activities, e.g., from paintball or laser tag to fundraising events like Toys for Tots or blood drives.

Additionally, SFMC has its own Academy – the STARFLEET Marine Corps Academy (SFMCA). 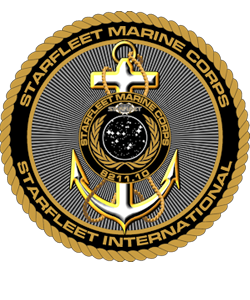 Starfleet Marine Corps is a part of STARFLEET International. To be a member of this group, you must be an active [paid] member of SFI and listed on the group’s database. The SFMC is an affiliate of SFI, whose members include veterans and active duty military, as well as people who just prefer a ‘military flavor’ to their Star Trek fan activities. The SFMC is organized along traditional military lines in the same manner as SFI. However, instead of being organized along Navy lines, and using terms such as ‘Ships’ or ‘Shuttles,’ the SFMC uses ground force equivalents, such as ‘Brigades’ or ‘Strike Groups’. Members of the SFMC are dedicated to the same principles as other members of SFI, including community service and charity fund-raising. However, because so many of our members identify with the real-world military, a significant amount of our focus is on organizations that associate with or assist military members, veterans and their families. Good examples are Operation Eagle, the Overseas Coupon Project, and the annual United States Marine Corps Reserve ‘Toys for Tots’ holiday drive.

NOTE: Despite its common use of military structure and terminology, the SFMC is in NO WAY a military or paramilitary organization 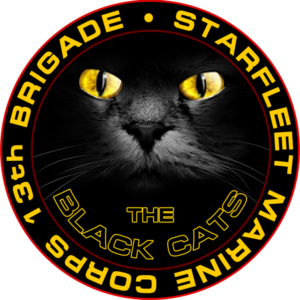 Like the other units that populate the Star Trek universe, being a Marine has its own rewards, especially since its creation was member-driven.  There are very few references to ground forces in Star Trek canon.  The Corps began as an idea – a fleet needs Marines.  It was built from the ground up and has its own command structure, Academy, rules, and way of doing things.  This is certainly evidence of the importance of the Corps to the members that belong to it.  To those members, it adds a more ‘military’ flair but more than that it adds an esprit d’corps.  If this appeals to you, look into the SFMC to augment your participation in the fleet.